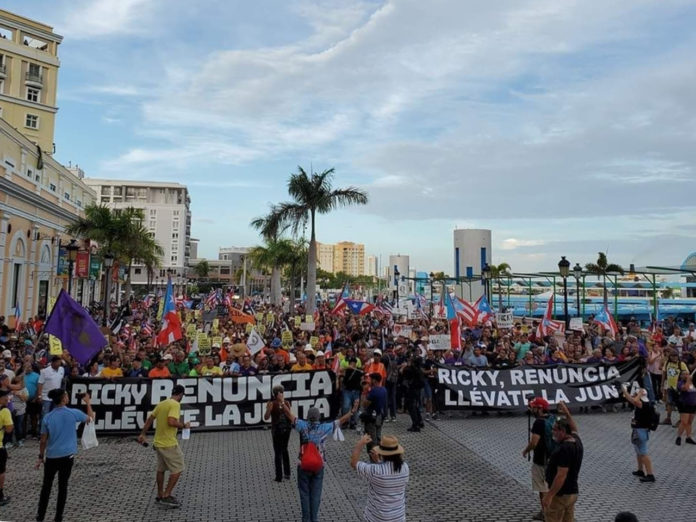 More than a week of mass protests has highlighted the intensification of the class struggle that is taking place in Puerto Rico.  The leaking of 889 pages of a group chat between Governor Ricardo Rosselló and 10 of his closest associates laden with crass insults against women, homosexuals and even the families of Maria victims, details of political intimidation and media manipulation has come in the wake of other recent scandals implicating several people with ties to the colonial administration to multimillion dollar embezzlement schemes.

While the arrogance and gangster-like behavior of group chat members depicted in the chat transcript were the veritable straw that broke the camel’s back, underlying the mass indignation expressed by the working masses are factors such as growing social inequality, mass unemployment, starvation wages, the pillaging of pension funds, the dismantling of public education and medical services as well as the imposition of regressive taxes.  These economic and social factors are compounded by the recent imperialist imposition of a Fiscal Control Board, known as la junta, that has brought to light the naked colonial rule to which Puerto Rico is subjected.

The massive and sustained protests have revealed a potentially explosive social situation that has provoked concern among the colonial ruling elite and its imperialist allies.  This concern has lead many political representatives of the capitalist class both in Puerto Rico and the US to publicly call for Rosselló’s resignation out of fear that the current protests could develop into a mass movement calling into question the capitalist system itself.

At present, all of the oppressed sectors and classes of colonial society – salaried workers, unemployed, small shop owners, self-employed manual laborers as well as many middle-class professionals in the liberal fields – are represented in the mass protest movement.  Although the predominant slogan calls for the Governor’s resignation, each of the contending social classes that form part of this spontaneous, broad-based movement is articulating demands more or less in accordance with its own class interests and perspective.

While the middle class and politically conservative elements of the working class have limited their slogans to calls for the governor to resign or appeals to the colonial legislature to initiate impeachment proceedings, the more class-conscious workers and radicalized intelligentsia have combined the call for resignation with the demand for a disbanding of the Fiscal Control Board (Ricky renuncia, y llévate la junta).  The revolutionary workers not only demand the governor’s resignation, but also fight to transform the mass protests into grassroots assemblies, a form of dual power structures that can eventually challenge the colonial-capitalist state.

Indeed, the recent proliferation of mass protests throughout the Puerto Rican archipelago has been grounded in the formation of ad hoc popular assemblies that have organized demonstrations as well as other symbolic acts to express both repudiation of the government and alternatives to current public policies.  Such spontaneous organizations represent the continuation of a trend which we have been monitoring since the Fall of 2015 when mass gatherings of unionized workers formed under the banner of Workers Assemblies to repudiate the imposition of austerity policies.

The successive eruptions of mass protests in Puerto Rico as a result of the deepening social, economic and political crises of capitalism is yet another validation of the assessment made by revolutionary Marxists of the inevitability of a new wave of revolutionary struggles.  While the existing mass movement, still in its infancy, retains a certain “popular” character, the most politically conscious elements of the working class understand that the transformation of the current movement into one in which the working class can seriously pose the question of the conquest of political power and socialist transformation ultimately depends on revolutionary leadership and program, both within Puerto Rico and its neighboring countries in the Caribbean and Latin American, and in the United States.

In this regard, our call to the class-conscious workers imbued with proletarian internationalism in the English-speaking world is to deepen their own struggles while strengthening the ties between workers across borders on the basis of a program of revolutionary socialist internationalism.

Proletarians of the world, unite!