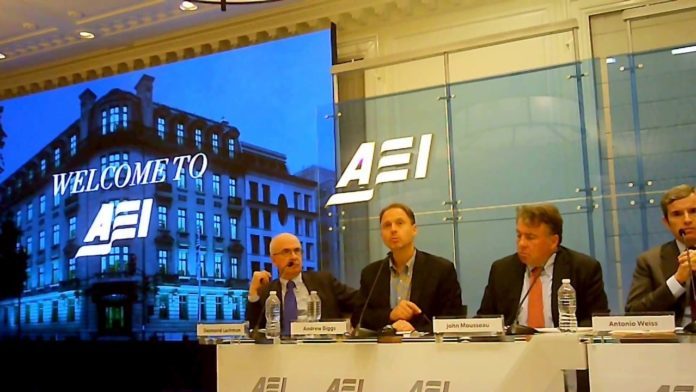 Andrew Biggs, a resident scholar at The American Enterprise Institute (AEI), the rightwing think tank, and member of the Wall Street Board, recently revealed an important truth.

As part of an AEI panel that included the infamous Antonio Weiss and Anne Krueger, and before which José Carrión also spoke, Mr. Biggs highlighted what he considers as structural barriers to Puerto Rico’s recovery.  Among these, the eminent academic in the service of the capitalists underscored that what needs to be eliminated in Puerto Rico are minimum wage laws, rules around just cause for worker dismissals, sick and maternity leave, and overtime pay.  According to Biggs, “the government doesn’t want to do these things” referring to said changes to labor laws, however, “If you let them not do them, they won’t do them.”  As such, Biggs argues that any federal aid should be tied to the changes he proposes as well as others to welfare programs for the poor.

And just what changes to welfare programs does the illustrious scholar who has made his career as an apologist for capitalism propose?  With the argument that the overly generous welfare programs for the poor in Puerto Rico disincentivize work, Biggs claims that, “A problem with labor supply on the island is the phase out of welfare benefits.”  As such, he suggests that “Congress could say, for the next year or so, anybody who’s receiving, you know, food stamps or TANF (Temporary Assistance for Needy Families), or whatever on the island, if they go to work in some job that is related in some way to the reconstruction on the island, that for some period, they would not suffer a phase-out of their benefits.”

With this gem Biggs has confirmed the warning we communists have made to the workers.  The truth is that were this “altruistic” member of the Board not so arrogant we would have to thank him for the service rendered of clearing up any doubts with respect to the true objective being pursued by the capitalists.

The declaration of war has been issued.

The capitalists, both foreign and domestic, seek to turn back the hands of the clock to erase one hundred years of worker conquests and dismantle programs to mitigate poverty.  The corrupt politicians in Puerto Rico are only trying to inject new life into the moribund colonial state, somewhat like an obese person facing sure death attempting to shed years of excesses, without giving up the remaining tentacles of state power with which they extract material advantages.

For their part, the working masses in the colony, who over the years have intoxicated themselves with illusions of consumerism and the supposed magnanimity of imperialism, now awaken with a crushing hangover.  As long as they remain hungover they will have to settle for poverty wages and an extremely oppressive labor regime or forced exile.  The only alternative to this tragic fate is to stand as men and women with dignity and fight.