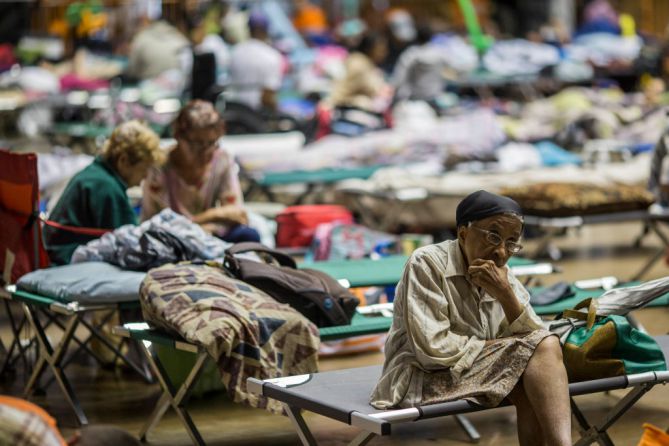 Since the beginning of the week, the head of the Federal Emergency Management Agency (FEMA) in Puerto Rico, Alejandro de la Campa, has been on an intense media tour to repair the tainted image of the agency in the wake of its mediocre response during the hurricane Maria.  Despite the fact that since last month FEMA has claimed to have delivered hundreds of thousands of tons of aid such as water, fuel and food, even helped by the intense media campaign, they seem to not have convinced anyone.

For several months, we have exposed the farce of so-called federal aid, first and foremost because FEMA funds are like an insurance paid by the workers.   As such they are not aid but rather a contractual relation which they must now honor.  Secondly, after the masquerade of help, the capitalists are attempting to launch an oxygen bag to prop up the mortgage industry after the 2008 crash through loans to families that have lost part or all of their homes.

Notwithstanding, the acute problem of access to housing which the masses suffer within the territory, as well as in the US, is now serving as the perfect excuse for the federal government, along with FEMA and Housing and Urban Development (HUD) to try to implement a pilot plan for the massive forced exodus of dispossessed families.  This plan, which is still in its stage of discussions around viability, would start by moving three thousand people to the US due to the supposed inability of immediately relocating them within Puerto Rico.  In disaster situations, FEMA’s TSA program pays the the cost of family relocations in hotels and other shelters while the process of rehabilitating homes in affected areas takes place.  However, according to both agencies, in this case “due to the shortage of available options, the possibility of evacuating large numbers to the continent has emerged.”  This plan has been discussed with officials from Fortaleza (the seat of the colonial governor) as well as business leaders of the home construction sector in the territory.

Casting aside “logistical concerns” expressed by federal agencies, this plan brings to the fore the openly fascist policy being carried out against sectors of the dispossessed, for whom a viable solution consists not of providing adequate housing but rather expulsion from the country against their will.  The sectors forwarding this plan are aware that those families “that qualify” will not be able to pay a mortgage loan so they have decided that the most appropriate would be to carry out a variant of the final solution applied in Nazi Germany; in other words, make them disappear.  In this sense, both federal agencies and Rosselló are consistent with the fascist policies being pushed by the Trump administration.

Of course, in order to avoid an “antidemocratic” image, Rosselló has rushed to point out that the program is voluntary.  Yet, the scores of dispossessed families are left to ask themselves what else can they do given the lack of alternatives in our country.  This kind of cynicism reveals the political bankruptcy of the territory’s administrators, who prefer to expel the dispossessed before providing real solutions to the acute problems the people face.  They are much too busy redesigning and implementing schemes for the wholesale looting of the country.

As a counterpoint to the form in which the exploiting classes treat the living, Rosselló and his gang continue to muddy themselves with the polemics around the official number of deaths due to the hurricane.  In a recent press conference, the territorial government had to accept that within just 10 days since the hurricane the number of deaths relative to September 2016 increased by 43%.  This signifies an increase of at least 350 deaths above the average, or 2,838 deaths this past September versus 2,366 registered in September of 2016.

Other sources, while also denouncing the criminal negligence of the government, point to the absence of preparation in hospitals despite the predictable loss of electricity as a cause of the dizzying rise in the number of deaths.  In addition to the lack of functioning equipment needed to stabilize people in delicate health, this situation has led to hospitals becoming breeding farms for the spread of bacteria and deplorable working conditions for medical workers.  In addition, the scandalous number of cadavers cremated without an autopsy, which now is estimated at 911, remains to be clarified.  According to government spokespersons, of the 55 deaths recognized as caused by the hurricane, only 20 were cremated.  However, recognizing the critical situation of hospitals during and after the crisis, it would be unbelievable to think that the previous number of deaths was not a direct consequence of the hurricane.

Despite this avalanche of data, the terroristic director of Public Safety, Hector Pesquera, maintains the official figure for deaths from Maria at 55.  Worse still, he has justified the deplorable attitude of the government with commentaries like, “Since there was a crisis situation, why do we need to investigate?”

There is no doubt that these facts confirm the criminal conduct not only of territorial administrators but also the federal agencies that operate in Puerto Rico.  Beyond the corruption schemes, this represents a conspiracy that lays bare the lack of scruples of the capitalist class in the US, along with the submissive complicity of Rosselló and his gang of hoods, to enrich themselves at the expense of the peoples’ suffering.  More evident still is how in their colonial servility Rosselló and his gang have reproduced the fascist policies of their imperialist masters in order to have access to the multimillion-dollar allocations of federal funds.

In view of these facts, which increase daily and make even more evident the collapse of the political structures within the territory as well as the moral bankruptcy of its leaders, we once again highlight our recovery program for the working class.  In particular, we demand a requisitioning of all hotel rooms so that they can be occupied by families left homeless as well as workers’ control over public utilities.  Only a planned economy under the political control of the working class can lead to a real recovery in Puerto Rico.  The class-conscious workers reject the so-called recovery plan purported to “lift up Puerto Rico” promoted by the Creole bourgeoisie and its spokespersons.  Our message to the working masses, contrary to their schemes responding to the quest for private profits, is that we must use all of our resources to tend to the needs of the majority.

Workers’ control over all public corporations!

We must organize workers’ councils!